Reference in the National Classic Dressage, the Rocas do Vouga Stud Farm is carrying the name of PSL and Brazil to the main contests of its modality.
Meet the International Athletes of Rocas de Vouga: 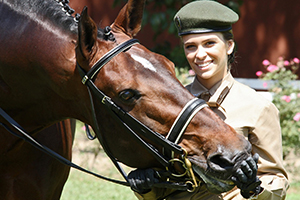 The most famous name in Brazilian Classic Dressage, Luiza Tavares de Almeida helped to boost the sport and has fundamental participation in the national modality. Her successful career started in 2006, when she won the first annual edition of Amil Dressage Cup, initiating a winning partnership with the unforgettable Samba, imported PSL from Sociedade das Silveiras, which was a mark in the history on competition arenas all over the world.

Was with the grey that Luiza saw her career taking off. In 2007, the combination had decisive role at the unprecedented classification of the Brazilian team on the Pan American Games in Rio de Janeiro, that later would bring the bronze medal.

In the following year, the representatives from Stud Rocas do Vouga were in Beijing and Luiza became the youngest equestrian to join the green and yellow commission at the Olympics.

The honorable 40º final position puts the Pure Blood Lusitano permanently among the best breeds of the planet.

With the status of "Olympic horsewoman", Luiza Almeida kept on expanding her curriculum exploring new frontiers on the back of a PSL. At the age of 18, she showed experience and maturity being the only athlete from South America, at the Final World Cup Dressage in Netherlands. One year later, in 2010, she was essential for Brazil’s first participation at the World Equestrian Games in Kentucky. A new Pan, this time in Guadalajara, Mexico, and the second Olympic participation, now in London, marking 65,800% final average, have left no doubts about this athlete’s pioneer spirit.

Off the track, the individual awards kept coming. Proof of this are four Prêmio Brasil Olímpico, in 2009, 20120, 2011 and 2014. The Brazilian Olympic Comission gives the country’s highest honor for the sport to the best and most important athletes of the season. Nowadays, Luiza Almeida is expecting a place in Rio’s games, when she will fight for a fabulous ending. 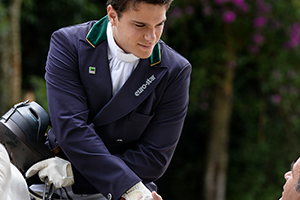 Pedro Tavares de Almeida is one of the most complete riders. His career on the equitation arena started early. As a child, he was already in evidence competing Jumping and Classic Dressage, modalities that been used as a foundation to Classic Dressage, on 2008 season.

The beginning was promising, winning the title at the Brazilian Oi Dressage Challenge, with the highest average of the contest, sponsored by the International Equestrian Federation in over 50 countries.

In 2014, Pedro was part of the Brazilian Dressage team at the World Equestrian Games in Normandy, when, for the first time in history, represented the country among with his siblings Luiza Tavares de Almeida and Manuel Almeida Neto, an achievement to the sport.

At 22, representing Stud Rocas do Vouga, he also been at the Pan American Games in Toronto, July 2015. 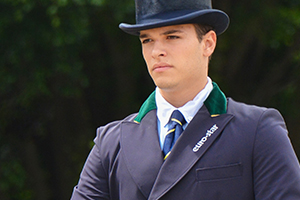 Manuel Tavares de Almeida Neto have been building, year after year, a solid career as one of the most important names of the Brazilian Classic Dressage. The international experience, as substitute from the pan American team in Guadalajara made his career as a rider take off.

In 2014, next to his siblings Luiza and Pedro, he represented Brazil and Couladeria Rocas do Vouga at the World Equestrian Games in Normandy, in a historic moment in the tracks.

The passion about horses have always been in the horsewoman Thaisa Almeida's heart. With her refined riding, polished in other equestrian modalities, she found in Classic Dressage the perfect combination.

Along with her siblings, Thaisa is part of the national elite representing the Pure Blood Lusitano. After a long time off the competitions, which was dedicated to studies and riding improvement, the horsewoman returned to the Dressage Team's saddle at Rocas do Vouga to appear in the highest level of the sport, in an excellent partnership with the stallion Toleirao da Broa.